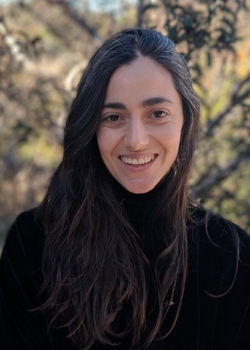 Rose Prevezer is in her final year at the Ziegler School of Rabbinic Studies. She is the Rabbinic Fellow for Arts at AJU and the Institute for Jewish Creativity, and also works as a doula, and in arts and culture progamming. She has previously served as the rabbinic intern at IKAR. She lives in Venice with her husband, Rabbi Gabriel Botnick, and their daughter, Lev.

The Jerusalem Talmud tells us that Tamar would earnestly pray: “Master of the Universe, let me not go empty from this house!” With Judah withholding that which is owed to her - marriage to his remaining son and the security and children that would flow from that - she is in a state of despair. Overwhelmed with fear and with a longing to fill the emptiness in her heart and womb, she is compelled to enact a risky and potentially fatal plan by disguising herself as a sex worker in order to lie with Judah and conceive the promised child from the House of Jacob.

The narrative arcs of this story are echoed in the Talmudic tale of Rabbi Hiya bar Ashi, a man so pious he denies himself intimate relations with his wife. One day, his wife returns home and unbeknownst to him, finds him praying for relief from the evil impulse of his sexual yearnings. Believing his abstemious behavior indicative of a lack of interest in marital relations, she has long suppressed her own desire for intimacy. Yet it now transpires that he too craves relations; just not, she concludes, with her! Upset by this betrayal, the wife seeks to test his fidelity and awaken his desire for her by disguising herself as the famously beautiful sex worker, Heruta. The moment Rabbi Hiya bar Ashi sets eyes on Heruta, he is so overcome with desire that he immediately propositions and lies with her.

Like Tamar, the wife of Rabbi Hiya bar Ashi has been denied so much by the man in her life. Like Tamar, she is confronting the emptiness and longing that comes from a lack of physical and emotional intimacy. Like Tamar, she is willing to step outside the bounds of what society deems to be acceptable behavior for a woman, going to extraordinary lengths to seize control of her own destiny and challenge the power of a patriarchal system that has denied her voice.

These are stories of women crying out, acting out, to be seen by the men in their life. Indeed, the story of Tamar is filled with the language of seeing. The place where Tamar sits to await Judah’s arrival is called petah enayim; “entrance to Enaim,” or, more literally “eye-opener.” When Tamar reveals to Judah that he is the father of her child it is with the words: “haker-na” “recognize,” recognize that this staff is yours; please recognize me as the mother of your child. The Talmud (Sotah 10b) suggests that with these words she is calling to Judah, “I request of you: recognize the image of your Creator in every person, and do not avert your eyes from me.”

For the wife of Rabbi Hiya bar Ashi, the attempt to be seen does not end well. Returning home, Rabbi Hiya bar Ashi finds his wife, now stripped of her Heruta finery, lighting the stove, the ultimate symbol of contented domesticity. Shamed by his actions, he climbs inside. His wife pulls him out, explaining that Heruta was really her in disguise. This fact, which should absolve her husband’s guilt, only increases it and he cries out: “But in any case, my intention was to transgress.” It is clear that Rabbi Hiya bar Ashi did not recognize his wife as Heruta, and cannot recognize her now as a person with needs that deserve to be met. He is concerned only with how her actions affected him, perceiving the encounter with his wife not as an extreme but necessary manifestation of her longing for intimacy, but instead as an indictment of his sexual desires.

In contrast, Tamar is seen. Judah, to his credit, not only comes to recognize Tamar, but also acknowledges and accepts full responsibility for her situation and the extreme measures to which she was driven. He accepts her demand for change and secures her rightful place in his family by announcing: “She is more in the right than I, for I did not give her to my son Shelah.” As such, Tamar and Judah are rewarded and from their union arises a lineage leading to King David.

Both narratives speak to the pain that arises when women’s desires are suppressed, and barely acknowledged, as well as to the strength, endurance, and courage women display in order to overcome the limitations society place on them. They also teach us that when confronted with the pain and trauma of the women in our lives, we must not be like Rabbi Hiya bar Ashi, but rather like Judah, willing to listen and understand, to open our eyes and recognize the call for change. To know that incredible healing and blessing can follow when the needs of women are no longer ignored and their stories told.