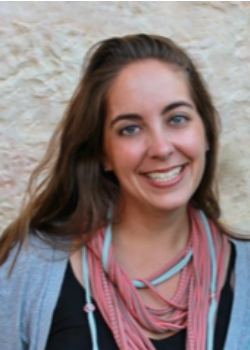 Amanda Russell was born and raised in Philadelphia. She took interest in service leading and studying nussach around the time of her Bat Mitzvah, and has further developed her skills by continuing to study ever since. Amanda attended the University of Pittsburgh (Pitt) where she formed many meaningful personal and professional relationships in the Pittsburgh Jewish community. She served as a student leader and member of The VoKols (Jewish-American a cappella group at Hillel) and Cantorial Soloist at two Pittsburgh congregations. She graduated Pitt with a BA in Communication Sciences and Disorders and a Certificate in Jewish Studies in 2011. In 2013, after working full-time in the Pittsburgh Jewish community, Amanda’s Jewish and musical passions lead her to California to begin Rabbinical School.

This is Amanda’s fourth year as the Rabbinic Intern at Congregation Beth Sholom in San Francisco, where she participates in service leading, teaching the Miller Intro to Judaism class and in the Religious School. She lives in Sherman Oaks with her husband and daughter, David and Reva Katz.

Imagine that you are about to receive one of the biggest pieces of news in your life. Maybe it is the results from a medical test or the sex of your unborn child. Perhaps you are waiting on a college decision or results from a big job interview. I wonder, is this the type of news that you want to hear alone, or would you rather be surrounded by the people that know and love you?

The Israelites have just left Egypt and they are finally a free people. And while they longed to be free for so long, they now realize that life outside of slavery is not perfect either. There are a new set of challenges: making peace between one another as a cohesive people, providing for themselves and general adjustments to their new life, to name a few. Physically they are a people, but as they stand at the foot of the mountain waiting for God to reveal Godself, they are about to add a whole new dimension, a spiritual and/or religious aspect of peoplehood, ie. the actual Torah itself. It says about the Israelites three things (Exodus 19:2):

From the English translation it is hard to notice the differentiation between the verses, but in the first two statements, the narrative is told in the plural: “they” did this and “they” did that. However, in the third statement, the verb “encamped” is written in the singular, referring to Israel as a nation. We know from the text that the Israelites were not given the Torah for three months after they left Egypt. And we are taught in a Midrash that during those three months, God permitted nine hundred and seventy-four generations to pass by before giving the Torah to this generation. God chose the Israelites because this generation was a cohesive group. They were of one heart and they were at peace with one another (Midrash Tanchuma, Yitro 9).

We later read (Exodus 19:19): “Moshe y’daber v’Elokim ya’anenu v’kol” - “Moses would speak and God would answer him with a voice.” And in another Midrash we learn that “God’s voice was in strength,” that is, in the strength that one could receive it (Shemot Rabbah 28:6). Therefore, when God spoke the Ten Commandments, each Israelite received the Torah in the strength and capacity that was in his or her power to hear.

There are so many interpretations of Torah, how do we know which one it was? Were the commandments given to a collective people and heard as one, or was each person able to hear and interpret according to his or her own strength?

This week we will read the Ten Commandments. We know these well. It is one of the biggest moments of our history that has arrived after a long journey and a lot of hardship. We as the keeper of this tradition have heard these before - we know what to expect and there is no suspense. This time around I challenge you to ask yourself, how are you hearing and internalizing these commandments? Are you hearing them alone or are you hearing them collectively as a people? How does each commandment reveal itself in your own life personally, and how might you need others to help fulfill what it is that God is asking of you?