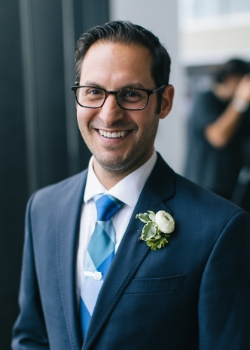 Joseph Shamash is a Jewish Persian Cowboy. He was born in Dallas, Texas to Iranian immigrants and lived most of his adult life in Los Angeles, California where he graduated from UCLA with a BA in Sociology. Joseph’s first career was in the entertainment industry where he worked as an editor, producer and research manager for DIRECTV, Fox Sports, TMZ, AOL, and OTX-IPSOS. In 2011, he left LA to learn at The Pardes Institute of Jewish Studies in Jerusalem where he fell in love with Jewish texts, Hebrew calligraphy, meditation and more. Fusing his filmmaking background, he created the One Wish Project - an award winning film project that seeks to create a more unified world by sharing stories of the “other. He is currently in his final year at the Ziegler School of Rabbinic Studies and also pursuing his MA in Education at American Jewish University. Joseph is married to Allie Peha Shamash and has a wonderful son, Benjamin, who is obsessed with blueberries.

Our tradition gives a great deal of significance to our names. By naming our children after those who came before us, we hope and pray that our kids inherit the positive attributes of our ancestors. On the other hand, if you are Johnny Cash, you name your boy Sue so he grows up mean and tough in order to fight his way through this difficult world.

Our names are so vital to the characters we play in this world that the book of Samuel says, “כשמו כן הוא” “Just as his name, so is he” (1 Samuel 25:25), to the point that undergoing a name change is like changing one’s destiny.

In this week’s parsha, Jacob gets a new name. On the verge of his epic reunion with his estranged brother Esau, he wrestles with a man all night long and is blessed with a new fate:

Jacob was left alone. Moreover, a man wrestled with him until the break of dawn.

When he saw that he had not prevailed against him, he wrenched Jacob’s hip at its socket, so that the socket of his hip was strained as he wrestled with him.

Then he said, “Let me go, for dawn is breaking.” Nevertheless, he answered, “I will not let you go, unless you bless me.”

Said the other, “What is your name?” He replied, “Jacob.”

Said he, “Your name shall no longer be Jacob, but Israel, for you have struggled with God and man, and have prevailed.” (Genesis 32:25-29)

One of the challenges that I have always had with Jacob’s name change is despite the fact that his name becomes Israel, we continue to call him Jacob. In our prayers, we say “God of Abraham, God of Isaac and God of Jacob,” but why don’t we say, “God of Israel?”

Further, why does the Torah itself fluctuate between naming him Jacob and Israel?

Once Avram is given the additional letter, he is forever called Abraham; he never returns to being called Avram. So too with Sarah and Joshua when they obtain their name change.

But not Israel. He is Jacob and sometimes, Israel.

I remember posing this difficulty to one of my teachers, Reb Mimi Feigelson who shared a text from the Hasidic master, Rabbi Levi Yitzchak m’Berdichev (Kedushat Levi 1740–1809):

For Rabbi Levi Yitzchak, there is a disconnect between those who are pious in their studies and mitzvot observance but who fall short when they interact with others. While they can achieve great heights by immersing themselves in study, they cannot maintain the same level of intentionality and connection while speaking with those before them.

However, Israel is the exception.

While Jacob cannot sustain his unity with people, Israel can.

“That is to say, [when Jacob is called Israel],” Rabbi Levi Yitzchak continues, “that you cleave firmly to God even while you are speaking with human beings; that is what it means ‘for you have struggled with God and man and prevailed.’”

What that means to me as a soon-to-be-ordained rabbi, is that I cannot hide behind my studies and my religious observance when it comes to my relationships.

It means, as hard as I try to learn Jewish texts, I must equally work to remember names and the details of the lives of those I serve.

The truth is, we all falter when it comes to our relationships. We all have our buttons pushed at times and our tempers flare that we lose sight of the sense of godliness in the person in front of our eyes.

While sustaining a perfect state of unity with God in our spiritual and our personal lives is unattainable, Rabbi Levi Yitzchak is telling us that our tradition is giving us an aspirational goal to strive for.

In addition, just as the Torah fluctuates when referring to Jacob or Israel, we too fall short from our aspirational goals. We never quite make it there!

As Rabbi Adin Steinsaltz writes in The Thirteen Petalled Rose:

...The feeling of “behold, I’ve arrived” could well undermine the capacity to continue, suggesting as it does that the Infinite can be reached in a finite number of steps. In fact, the very concept of the Divine as infinite implies an activity that is endless, of which one must never grow weary. At every rung of [the] ascent, the penitent, like any person who follows the way of God, perceives mainly the remoteness. Only in looking back can one obtain some idea of the distance already covered, of the degree of progress. Repentance does not bring a sense of serenity or of completion but stimulates a reaching out in further effort.

If only i were that easy. If only we had concrete, clearly defined steps that we all could take and after we completed them, we could shout, “I did it! I’m my best self and I will always maintain this enlightened height!”

However, to quote one of my teachers, Rabbi David Aaron, “We are not human beings. We are human becoming’s.”

We are in constant flux between Jacob and Israel. Of reaching new heights in our own growth and subsequently skidding back to old patterns and negative behaviors.

For Jacob, he receives his name because he comes out of his mother’s womb grabbing the heal (עקב) of his older brother. However, that same Hebrew root can also mean “deceitful.”

In addition, Jacob’s entire life is filled with trickery and deception -- sometimes he is the trickster and other times he is the one being deceived. For instance:

Lie after lie, Jacob is in fact living up to his namesake.

However, exactly at this juncture in his life, when he is gripped with fear because his brother is approaching along with 400 men, his destiny is changed.

He wrestles with this unknown man all night long and his hip is pulled out of socket.

He can no longer live a life of deceit.

He must face his brother and beg for forgiveness.

He must cleave to God through not only mitzvot but also see the godliness of the other right before his eyes.

For that, a boy named Jake needed to become Israel.