The Ruined House, by Ruby Namdar 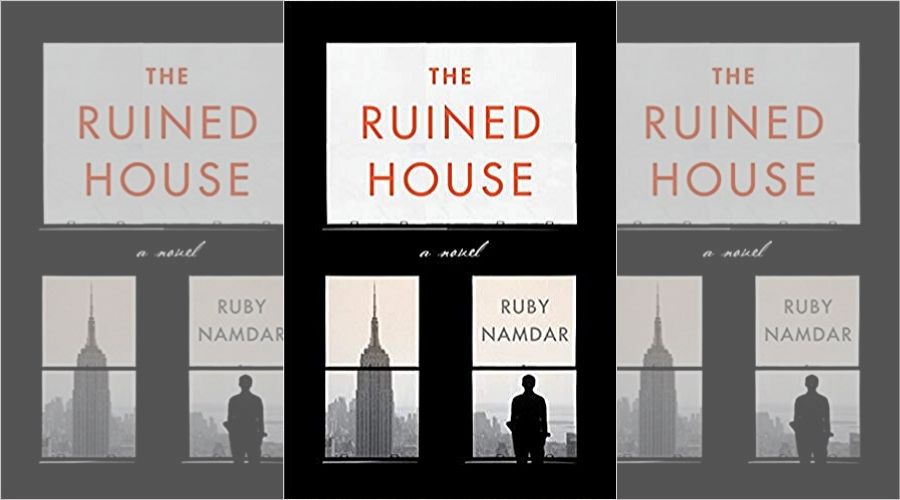 From television and film to stand-up comedy and literature, trauma is one of the hot topics of the moment. But rather than see its popularity as yet another artistic trend, it might make more sense to understand it as a cultural awakening — a trademark of this era’s growing awareness of the pervasive violence with which we constantly are bombarded. Whether as a direct recipient of trauma, an inheritor of it or simply an observer (either directly or via the media), such darkness has touched all of us in one way or another.

Ruby Namdar, an Israeli writer who has lived in New York City for nearly two decades, is no exception to this, as we see in his recent novel, “The Ruined House,” an almost apocalyptic story that flirts with the boundary between madness and meaning. In 2015, Namdar won the Sapir Prize, Israel’s most prestigious literary award, while living outside Israel. “The Ruined House” was written in Hebrew and translated into English by Hillel Halkin just over a year ago.

True to conventional Jewish form, “The Ruined House” resists answers and relies on emphasizing the unknown and the questions that inevitably arise from its dark depths. And the depths of the novel’s main character, Andrew P. Cohen, are dark indeed. Namdar fantasizes about tragedy like a second-generation Holocaust writer, but with a sense of self-awareness that sometimes is lacking in the stories of Holocaust survivors’ children who have turned to fiction writing. This isn’t necessarily surprising. After all, in many cases, children born to Holocaust survivors describe a sense of having inherited, in part, the trauma that defined their parents’ lives. Based on psychological studies, we know this is possible — that a child who grows up in the home of someone who is severely traumatized cannot help but absorb the darkness.

However, the trauma the child of the survivor experiences is not the same trauma the parent experienced. It is fuzzier, grayer, harder to categorize. Yet it persists. And for this reason, the unspoken task of many second-generation survivors is to find their place within their parents’ trauma in order to understand who they are and from where they come.

But this is a paradox.

The adage of “never forget, and yet never will you know” comes back to haunt these grown children. We see in some of their writing a willful hijacking of their parents’ trauma, a phenomenon that is, ironically, a symptom of the trauma they have inherited.

Namdar is not a second-generation writer. He has no familial connection to the Holocaust, which, he said, didn’t prevent him from having “very vivid Holocaust dreams and fantasies” throughout his childhood and teenage years. He did not inherit his fascination with and insight into the tragedy from his parents. His fragmented musings on the Holocaust, via the Cohen character, are not pleas for readers to see this as his trauma. Rather, they exist as a kind of reminder that inheritance comes in many forms. After all, it’s not like he hasn’t inherited these stories from someone, somewhere, despite the absence of biological ancestry.

Namdar’s talk at the 2018 Jewish American and Holocaust Literature Symposium in Miami made this abundantly clear. Namdar, of Iranian-Jewish heritage, invokes the Holocaust when describing his childhood in Jerusalem, saying that it was an “enormous disaster hanging in the sky … a lead cloud … endlessly heavy,” something that could “smother us … and there’s nothing we can do.”

This sentiment is not unique, nor are the metaphors uncommon in the context of describing the way the Holocaust continues to haunt people. What is most interesting is that he speaks not as an Ashkenazi Jew, but as an Iranian Jew growing up in 1960s and ’70s Israel.

The Holocaust wasn’t a hot topic of conversation in Israel until after the 1961 Adolf Eichmann trial, which global media covered extensively. Previously, the narrative of collective victimization was, understandably, not a popular one in Israel, a fledgling country working to display its strengths rather than its weaknesses. But the highly publicized trial forced people to listen to survivors’ stories and to accept that many Jews who had immigrated to Israel after the war were deeply traumatized, and that this narrative was an inseparable part of the Israeli narrative. Slowly but surely, the stories of those who suffered and died became part of Israeli culture.

As a scholar of Holocaust literature, I’ve always known this. However, Namdar’s words cast everything in a different light. One can imagine that for Iranian Jews growing up in a world in which the Holocaust suddenly is the dominant cultural narrative, there must be something simultaneously inviting and alienating about it. It’s the “enormous disaster hanging in the sky,” but it’s also something to which one has no direct connection, the great event to which Iranian Jews were (thankfully) not invited. No grandparents lost to the crematoria’s smoke, no aunts, uncles or cousins who barely escaped the Nazi killing machine. Just a world molded by the trauma of others yet inescapable because of physical proximity.

Trauma has far-reaching tentacles, wrapping itself not just around those who experience it directly but all those who come into contact with the recipients of it. Studies have shown that trauma affects even sexual dynamics. In his talk, Namdar revealed that as a young person, the first time he was exposed to naked bodies was not by way of a stolen glimpse of a page in a smutty magazine, but through Holocaust imagery. Archival footage from the Holocaust abounds with images of naked and emaciated bodies. My own scholarship has pushed back against the overuse of these images in Holocaust education because, over time, we run the risk of becoming desensitized to their horror and begin to see people without really seeing them.

But in the ’60s and ’70s in Israel, these images served an important purpose: to imprint on our minds the horror of what had happened only about two decades before, to ensure we would “never forget,” that we would constantly fight against the possibility of reoccurrence. These stories and images were not hidden from anyone, which raises the question of what happens when such images are the dominant backdrop of childhood and adolescence. How does early and constant exposure to images of lifeless, naked bodies impact sexual awakening?

Cohen is a character for whom the line between the erotic and non-erotic constantly blurs, which distresses him. After gazing at the “shabbily naked bodies around him” in the gym’s locker room, Cohen becomes irritated. These bodies repel him, as “old Jews taken to the gas chambers must have looked like that: naked, ugly, stripped of their clothes and their dignity.” Cohen is in a downward spiral, trying to maintain the dignity he imagines characterizes him, but seeing remnants of the Holocaust at each turn (not to mention his increasing horrifying visions that ultimately lead to a breakdown) prevents him from doing so.

When I began to read Namdar’s stunning novel, I was sure it would be a story about 9/11. Set in New York City, the story begins on Sept. 6, 2000, almost a year before the tragedy, and we follow the trajectory of the magnificent and tormented professor of comparative culture Andrew P. Cohen over the course of approximately one year. It’s a story in which dates and counting days matter, with a date demarcating each section. The day the story begins is also the sixth day of the Hebrew month of Elul in the year 5760. Thus, we are poised to read the story through the lenses of two different calendars, two different times.

But the point of the story is that perhaps we are not dealing with two different times. Perhaps they are one and the same. In that respect, the question of whether it is a book about 9/11 ceases to be important. The shadow of 9/11 may loom large over the story, but it is just one of many moments of violence that haunt the book. The last section is dated a little more than a month before 9/11. A subsequent epilogue is dated Sept. 18, 2001, the 1st of Tishrei 5762 — a week after 9/11. But the events of 9/11 are not directly mentioned. In fact, on this day it is tashlich, and Cohen is hopeful, imagining in the final line that everything “would be the way it was, almost. Only a whisper could still be heard where once stood the ruined house.”

This is a far cry from the beginning of the novel, which begins with the gates of heaven opening “above the great city of New York,” revealing all seven celestial spheres and the figure of an ancient priest, his head “wrapped in a linen turban and a golden fire pan in his hand.” It is a vision seen only by an old homeless man, “filthy and bloated with hunger, shrouded in his tatters, wishing himself dead,” and who finds his wish instantly granted with the appearance of this being. The juxtaposition of the celestial being and the filthy human is startling. But it is the heavenly being from ancient days who emerges from this battle of imagery, leaving us to wonder what we are to make of the first appearance of Cohen a few lines later.

As some have pointed out, Cohen, all ego, is something of a Rothian character. He’s a divorced man with a grand sense of himself and his accomplishments, a man who “could never have spent his life chained to the tedious mediocrity of such bourgeois domesticity” and who has a 26-year-old Chinese-American girlfriend. He is an elegant man full of charisma, of whom students, particularly women, say, “He has an aura.” He is brilliant and refined, despite the misogyny that characterizes his relationships with the women in his life. He is not particularly religious, although the fervor with which he attends to the meats he cooks is reminiscent of either religious zeal or erotic passion. However, painting Namdar’s world as a Rothian world would be to sell him short.

Where Philip Roth’s fictional worlds are mostly devoid of religious and spiritual elements, both aspects indelibly mark the “The Ruined House.” Cohen begins to see spiritual visions that grow increasingly violent and terrifying, and the story is broken up by what would appear to be talmudic pages abruptly embedded into a contemporary novel. However, these pages are not torn from the Talmud, but are created in its style to tell the story of an ancient high priest as he prepares for a ritual sacrifice on Yom Kippur. It becomes clear that Cohen, whose surname connects him to the long line of biblical priests, is experiencing visions resembling the rituals of ancient Judaism, and it soon becomes difficult for Cohen to distinguish between the past and the present, with both having collapsed under the weight of such intensity.

There are many things about this novel that make it unique, but in a time when it seems everyone has a story to tell about trauma, Namdar has managed to find a new way in. He has said of the Holocaust and its images of nudity and vulnerability that it is something he returns to “again and again and again.” In this way, the book is a kind of midrashic response to the Holocaust. If we understand the Holocaust not as an event that began in 1938 and ended in 1945 but instead as a symptom of a darkness that has always been with us, it’s not so hard to read “The Ruined House” as a response not just to the Holocaust, but to all the violences and crises of Jewish history since the beginning of time. --Monica Osborne, Jewish Journal, retrieved from: https://jewishjournal.com/culture/books/301068/descent-into-trauma-madness-and-meaning/