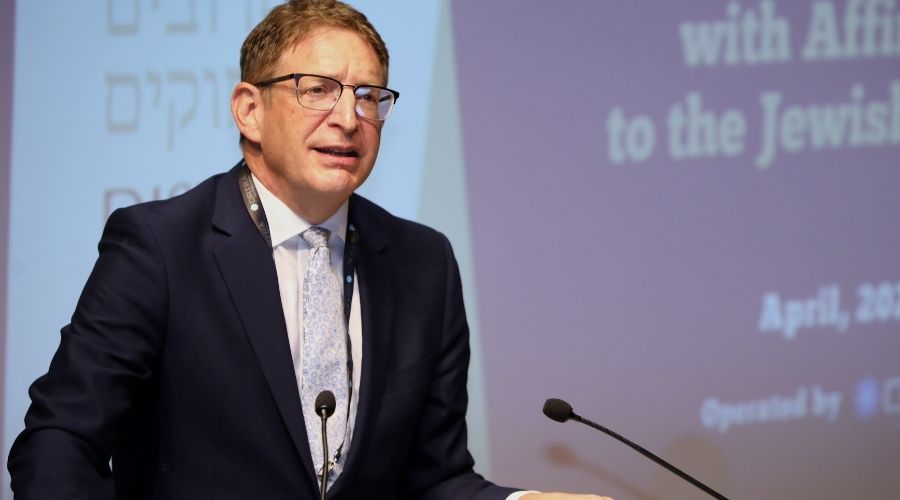 One of the main drivers of those who now seek affinity with Jewish communities is genetic testing and the increasing attention to ancestry. Millions of people are now finding out that they have one or more Jewish ancestors, sometimes linked to traumatic events in Jewish history.

The threat of antisemitism in the U.S. and across the world is very real. However, as the Jewish community adopts an increasingly defensive posture in the face of attacks on social media, college campuses and the streets, we are missing the opportunity to mobilize relatively large numbers of people who have recently discovered their affinity with us. The challenge is to fend off the attacks while taking advantage of these heretofore unimagined communities, the ‘distant relatives’ who might stand at our side.

Two very different narratives describe the conditions of Jews in the U.S. and around the world.  One, disappointingly familiar, is that rising antisemitism from both the left and the right has created fear and insecurity among those who are Jewish, sometimes, but not always related to their identification with Israel. The Anti-Defamation League (ADL) recently reported that, “Antisemitic incidents tracked in the 2021 Audit of Antisemitic Incidents reached an all-time high of 2,717 in the United States last year.” A new University of Tel Aviv study found, “record-high number of reports of antisemitic activity throughout the world in 2021.” Not surprisingly, a very popular book by Dara Horn argues that, “People love dead Jews. Living Jews, not so much.”

Given the persistent and now increasing threat of antisemitism, a traditionally threatened minority accustomed to predictions about demographic marginalization naturally looks to protect itself partially by developing allies. Creating alliances with other threatened groups against bigotry not only makes sense as a tactic but is, of course, a responsible thing to do. Jonathan Greenblatt, CEO of the ADL, makes the traditional argument, “We would want others to stand up for us if we were threatened, so all of us need to stand up for everyone else.”

However, sometimes your putative friends are not reliable. As Forward columnist Alex Zeldin noted last year after having been the target of antisemitic verbal abuse, “It’s definitely a moment of frustration. A lot of the messaging that Jews have gotten over the last four years … is you’ve got to show up. You have to be an ally. You have to speak up for others. And I think a lot of Jews, myself included, very much took that to heart,” by “marching in support of women’s and immigrant rights, as well as the Black Lives Matter movement. But recently . . .  reciprocity has been hard to find.”

However, there is also a second narrative that offers opportunities and the hope of more steadfast alliances. Put simply, for the first time in 2,000 years, there are a large number of people throughout the world who are now seeking, or have the potential to seek, affinity with the Jewish people. The individuals and communities seeking affinity with Jewish communities have many different dynamics. Some are the children of mixed marriages, increasingly the norm among non-Orthodox Jews in the U.S., or whose parents or grandparents, as in the former Soviet Union and Eastern Bloc, had to hide their identities under communism. Some have more distant Jewish descent, such as those whose ancestors were forced to convent in Iberia. And some have no obvious or genetic connection to Judaism but have found their way, including groups in Uganda, West Africa and South Asia.

This is a nascent phenomenon and one that, while evident in many localities, is hard to describe as a national or global trend.

Fortunately, the Maas Center for Jewish Journeys of American Jewish University was recently able to co-sponsor the first ever international conference on the increasing number of people who may want affinity with the Jewish people. The conference, entitled “Distant Relatives,” was held in Tel Aviv and Jerusalem along with the Herzl Institute of Jerusalem and ANU—the Museum of the Jewish People. “Distant Relatives” broke new ground by exploring these linked phenomena through presentations by panels of international scholars, community representatives and Israeli activists.

One of the main drivers of those who now seek affinity with Jewish communities is genetic testing and the increasing attention to ancestry. Millions of people are now finding out that they have one or more Jewish ancestors, sometimes linked to traumatic events in Jewish history. For instance, the number of self-reported Jews in the 2011 British census was 272,300. However, demographer Daniel Staesky reported at the conference that using data from MyHeritage, a genetic testing company, it is estimated that 722,600 have at least one-quarter Ashkenazi Jewish ancestry. Similarly, Ofir Haivry noted at our meeting that research conducted by the “Reconnectar,” an Israeli organization, “analyzing data from hundreds of thousands of entries into sites and applications dealing with things like family origins, family names and historical information has concluded that there are some 10-15 million people mainly (but not only) in Latin America, who identify themselves to some degree as descendants of forcibly converted Iberian Jews.” A special committee commissioned by Israel’s Ministry of Diaspora Affairs noted, “In other words, in recent years a pool of millions of people [has emerged] seek[ing] to form an active bond with the Jewish People, even though only a small number of them wish to convert and to immigrate to Israel.”

These numbers are extraordinary given that there are only about 15 million Jews worldwide, about half in Israel.

This new narrative of those seek affinity with Jewish communities has the potential to upend the dynamics of the fight against antisemitism. It extends out those who might have immediate reasons for concern about antisemitism. That many in these new groups have ethnic and racial backgrounds outside of the Ashkenazi norm makes them even more valuable as close allies.

Yet, Haivry reports that the rise of individuals and groups seeking affiliation with the Jewish people, “is not being encouraged in any form by the Jewish or Israeli establishment, indeed it is being ignored or even actively resisted.” No doubt, part of the reason is because many Jews shy away from the difficult and vexed question of ‘who is a Jew.’ However, this question, which has paralyzed many conversations, does not, in fact, need to be addressed if the issue is how to welcome people into a real coalition against antisemitism, as opposed to religious ceremonies or emigration to Israel. It is enough to recognize that there may be new groups of allies who are not necessarily Jewish under any form of Jewish law, but have good reasons to be supportive that go beyond the ideological or transactional ties that the Jewish community has with other threatened groups.

As a political scientist who came late to the Jewish communal world, I am surprised that we talk incessantly about who is with us but seldom do anything approaching formal constituency mapping. In such an exercise, those who seek to affiliate with the Jewish people would occupy the valuable space between the recognized Jewish population and possible allies who otherwise lack the ties to be absolutely dependable in the fight against antisemitism.

The new University of Tel Aviv report noted the surge of antisemitism despite the great effort by many to combat it: “It’s time to admit: The struggle [against antisemitism] is failing.” Part of the problem in fighting antisemitism is that there just are not enough people with the proverbial skin in the game. When addressing our conference, Israel’s President Isaac Herzog called the rise of individuals and groups seeking out the Jewish people an “almost wonderous reality.” However, the extraordinary possibilities will only be achieved if the Jewish communities look beyond traditional parochial concerns and embrace those who may already be seeking us out.