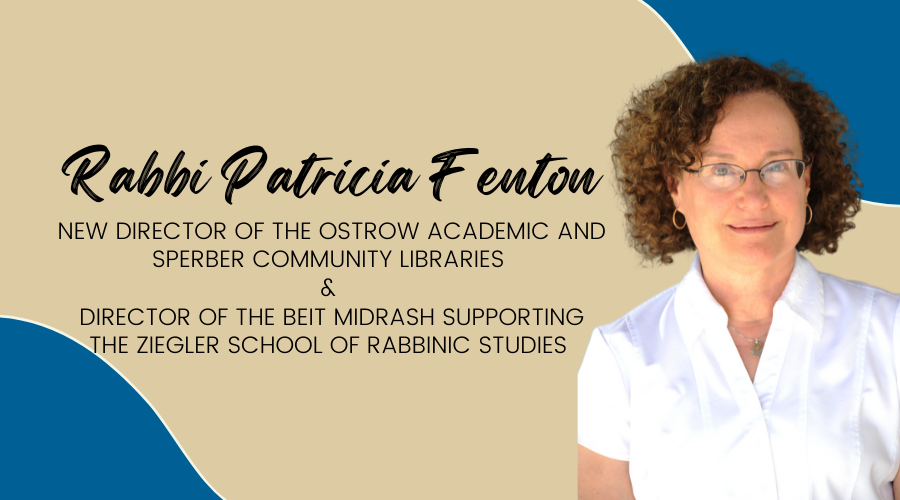 American Jewish University is proud to announce the new Director of both our Ostrow Academic and Sperber Community Libraries and the Director of the Beit Midrash supporting The Ziegler School of Rabbinic Studies, Rabbi Patricia Fenton. Rabbi Fenton is also a lecturer for Ziegler and the School for Jewish Education and Leadership. She was previously the Library Manager of Public Services, Judaica, and Periodicals.

We are enthused to report that Rabbi Patricia Fenton has been promoted to serve as Director of the Ostrow Academic and Sperber Community Libraries, and Director of the Beit Midrash supporting The Ziegler School of Rabbinic Studies (ZSRS). Rabbi Fenton has been with AJU since 2007 as a dedicated lecturer and library professional, most recently as our library's Manager of Public Services, Judaica, and Periodicals. She teaches several courses in ZSRS and School for Jewish Education and Leadership (SJEL), as well as for the Introduction to Judaism program in our Maas Center for Jewish Journeys. Universally appreciated and recognized by our administration, community members, faculty, and students for her consummate and welcoming teaching and librarian services, we are thrilled and fortunate to have Rabbi Fenton in a formal leadership role at AJU.

For some time now, Rabbi Fenton has been a cornerstone of the Ziegler School’s illustrious Beit Midrash. With this title and promotion, the University celebrates and recognizes the extraordinary teacher, counselor, rabbi and mentor she has always been, and anticipates even greater leadership in the coming years. We are so blessed by the gift of her presence.

Rabbi Patricia Fenton was born and raised in the Los Angeles area. She has a B.S. in Business Administration from the University of California at Berkeley, and a master's degree and rabbinic ordination from the Jewish Theological Seminary of America in New York. In addition to her work as the Director of AJU Libraries, she is an adjunct lecturer in the Zeigler School of Rabbinic Studies (ZSRS) and in AJU’s School for Jewish Education and Leadership (SJEL). Pat teaches in the Miller Introduction to Judaism program, and often serves on the Rabbinical Assembly’s Beit Din for conversions to Judaism. She has worked in the corporate world as well as in libraries, and she has travelled extensively outside of the United States. Pat writes Torah commentary for the Los Angeles Jewish Journal’s “Table for Five,” and the Forward named Pat one of America’s most inspiring rabbis.

Please join us in congratulating Rabbi Patricia Fenton for this professional achievement.