Media Without an Agenda: A New Voice Emerges

Media Without an Agenda: A New Voice Emerges

In a media landscape that seeks to affirm rather than inform, Eden Cohen launched A Wider Frame, which offers a nuanced, panoramic view of Jewish news. Join her in conversation with Rabbi Sherre Hirsch, to outline the fascinating path that led her to create this outlet, and discuss how we can remember our past as we aim to create a better future. 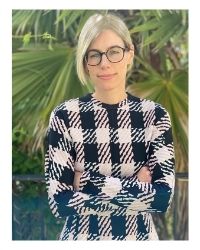 Eden Cohen is the President and Founder of A Wider Frame, a biweekly newsletter created out of a desire to help educate, connect and engage readers on issues important to the Jewish world. After graduating from University of Wisconsin- Madison, Eden, a Pittsburgh native, spent several months living in Jerusalem. It was in Israel where Eden’s passion for advocating for issues impacting Jews around the world took shape. In addition to managing her digital newsletter, Eden is a practicing entertainment attorney in Los Angeles and an active member of several Jewish organizations and institutions. Eden resides in Los Angeles with her husband, two dogs, and two cats.