New Documentary "They Survived Together" Reveals Price of Survival 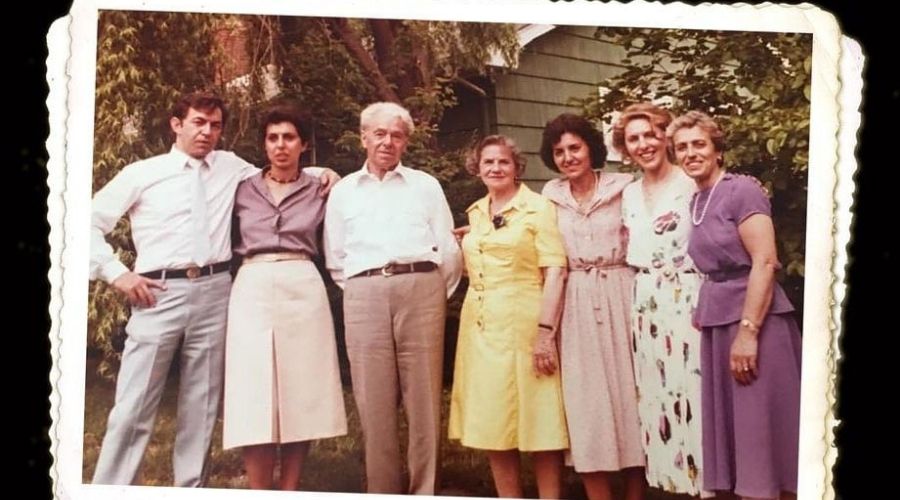 The very name of the documentary “They Survived Together,” which premieres at the Museum of Tolerance on April 6, seems to promise a happy ending. Herman and Sara Neiger survived with their children Cesia, Basia, Benjamin, Tosia and Hanka and are together again. It didn’t happen very often so we should rejoice. And yet, because the documentary, narrated by the Neiger children, is an honest probing story of survival, one cannot quite rejoice at the end as one ponders the price that was paid for survival, even the anguish of survival itself.

As with many Holocaust stories, the film is divided into three parts: Before, During and After. Before, Herman and Sara lived in the intense Jewish community of Krakow in Kazimierz, a neighborhood named after the great medieval Polish King, who welcomed the Jews because he knew he could make them useful to his kingdom. Anyone who has visited Krakow and walked through the streets of Kazimierz can see the faint remnants of that once vital community, the great synagogues—large and small—the schools, the streets, the cafes, even the void on the right upper third of the doorposts where once a mezuzah was to be found. The Neigers were modestly successful. How shall one put it? They made a living.

How they made a living proved vital to their survival. Herman was a professional soccer player with intense, even warm relations with his teammates, even respected by his opponents, and Sara had a fruit store, selling the produce that local farmers had grown. She too, knew gentiles who had been her suppliers and her customers. The audience will be enchanted by the many home movies that depict pre-war Jewish Krakow, a charming city, then as now.

Like all of Krakow’s Jews, the elder Neigers were marked with a white armband with a Jewish star soon after the Germans invaded and ghettoized shortly thereafter. The ghetto endured through 1940-1941 and then in 1942 the great deportations of Krakow Jews to Belzec began. Belzec was the death camp where 500,000 Galician Jews were murdered between March and December 1942 with only two—yes, two—known survivors. Somehow, all the Neigers avoided deportation, unlike some 50 of their cousins. Sara was useful to the Nazis because the non-Jews in Krakow and the Germans who occupied the city and made it Poland’s capital continued to require food and the services of those who provided it. Jews could be starved; this was not the case for those on the other side of the ghetto’s fence.

The Neigers’ contact with non-Jews proved essential to their escape. At the moment of the final deportation in the winter of 1943, they were loaded into a trash wagon and taken through the gates. The acquired false identity papers and made their way first to the Czech border and then into Hungary. Their young children remember the snow and the fear, but mostly they recall that under no circumstances could they reveal that they were Jews, something more easily done by the girls, more difficult for their circumcised brother.

Survivors often say they survived by luck. It took much luck, but skills were also essential: a fluency in the native language, relationships with gentiles who might provide false documents, shelter or cover, the ability to pass as a non-Jew, as well as the nerve and discipline to live life on the edge. For Herman, the ability to play chess was the key to a life-saving friendship with a village priest. Until March 1944, Hungarian Jews were faced with discrimination and antisemitism. Some men were sent off to forced labor, but there was no mass murder of Hungarian Jews. Even though foreign Jews were deported as early as 1941 to the death in killing fields, Hungarian Jews felt safe, protected as citizens. One of the most painful moments of the documentary is their children’s distinct, historically credible recollection that Herman and Sara tried to warn Hungarian Jews of the fate that awaited them only to be treated as fools and mad. They told their story, but nobody listened. Elie Wiesel famously wrote that “illusion” ruled Hungarian Jews, and the most fatal illusion was the illusion of safety.

All that changed on March 19, 1944 when the Germans invaded, and Jews were ghettoized. Deportations to Auschwitz began on May 15th. Still living as non-Jews, the Neigers escaped deportation at least for a time. Yet the village in which they were living was captured and an inspection was launched to find Jews who were passing as non-Jews. Herman’s priest friend could vouch for Herman but not for both father and son. So Benjamin was separated from his family, sent into the forest to live with other escaping Jews in a barn with the promise that his father would return. The Neigers were deported not as Jews but as villagers and Herman’s promise could not be kept. Not yet of Bar Mitzvah age, Benjamin was on his own in a race against time. Would the Soviet army liberate him before the Germans killed him, before his provisions and his luck ran out? The audience knows the answer as Benjamin narrates his story, but still the tension builds.

The girls relate a harrowing trip by train where of necessity born of desperation, their parents put one of them off the train, hoping against hope that she might survive on her own or that they could at least protect the remaining children. The image of a child too young to understand pleading with her parents not to abandon her is tormenting, the story even more so. Herman brought her back on the train. The children did not know why their parents made such an impossible decision. They suspected that their father and mother disagreed, but there are things that children cannot know, and it was too late for us to know for sure since Herman and Sara are not here to narrate.

THE IMAGE OF A CHILD TOO YOUNG TO UNDERSTAND PLEADING WITH HER PARENTS NOT TO ABANDON HER IS TORMENTING, THE STORY EVEN MORE SO.

The great literary scholar Lawrence Langer developed a term to describe such dilemma in the Holocaust. The Neigers faced a “choiceless choice,” “the moment when crucial decisions do not reflect the options between life and death but between one form of abnormal response and another, both imposed by a situation that was in no way of the victim’s own choosing.” Only by understanding the distance between that world and our world can we presume to enter the world of the Holocaust. And to listen to the Neiger children narrate their own experience is to enter that world with all its complexity and perplexity. One daughter recalls: “My parents decided that we would face the future together,” seemingly forgetting that “together” is without Benjamin.

Liberation finally comes and Herman begins to search for his son. Benjamin was led to believe that his parents were dead. Now an orphan he must fend for himself surviving by chopping wood and proving useful until he is sent to an orphanage in Budapest. The chance reunion of father and son is exhilarating, not only for them but for the audience who experiences it 77 years later.

ONLY BY UNDERSTANDING THE DISTANCE BETWEEN THAT WORLD AND OUR WORLD CAN WE PRESUME TO ENTER THE WORLD OF THE HOLOCAUST.

The mark of an honest Holocaust documentary is when it tells the audience something they do not want to hear and in “They Survived Together,” Benjamin startles his audience by saying that he felt his parents abandoned him. He never could forgive them. Even knowing that leaving him behind was the only way he—or they—could survive, he felt abandoned, not rescued, not saved.

Many children survivors never recovered their trust in the world, having realized at too young an age that the world cannot be trusted, and their parents did not, could not, perhaps even would not protect them. It takes more than a lifetime to recover from such a trauma.

We encounter these children survivors briefly afterward as older adults, having made a life for themselves individually, enjoying each other and the notion of family. There is a sense of triumph, yet the shadows are haunting.

Since family is at the core of this documentary and so central to our existence, past, present and future, “They Survived Together” is challenging and haunting, raising more questions than answers, questions that become even more urgent given what is happening at this moment in history with the brutality of the war in Ukraine, the desperate plight of refugees and the separation of families.

Seeing this film, I was reminded of the Hasidic teaching of Menachem Mendl of Kotzk: “Nothing is as whole as a heart that has been broken and mended.” This film shows that even after the mending, the scabs remain and the whole is never quite whole again.

Michael Berenbaum is director of the Sigi Ziering Institute and a professor of Jewish Studies at American Jewish University.

This article was originally published in the Jewish Journal on April 5, 2022.