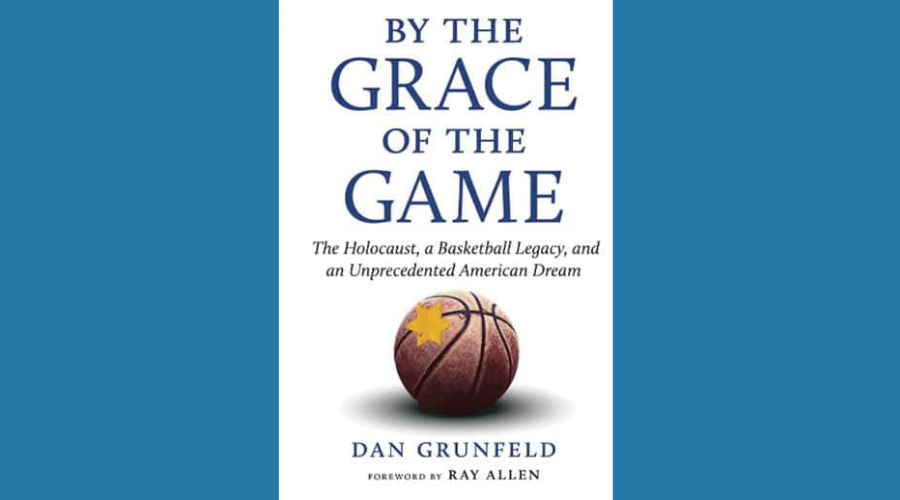 By chance, several weeks ago someone — I can’t remember whom but please identify yourself so I can say thank you — dropped Dan Grunfeld’s autobiography at my home.

By chance, I took it on a red-eye flight to Florida for a speaking engagement.

By chance, I could not fall asleep, so I opened the book and read it through the night. I simply could not put it down.

Dan Grunfeld is the son of Ernie Grunfeld, who had a storied career in basketball. An All-American athlete at the University of Tennessee where he starred with NBA Hall of Famer Bernard King, and an Olympic Gold Medalist, he then went on to an NBA career with the New York Knicks, the team of my youth. His post-retirement career in broadcasting and as general manager of the Knicks and several other teams, was no less impressive. I was always keenly interested in Ernie Grunfeld, a proud, committed Jew, who played in the NBA long after Jews had starred as players. In my youth Jews were Commissioners and owners, mostly coaches—great ones such as Red Auerbach of the Celtics and the Knicks’ Red Holtzman, whose jersey hangs over the rafters at Madison Square Garden, the number 613, his career victories as a coach, emblazoned on it.

DAN GRUNFELD’S BIRTH WAS PLANNED AROUND THE KNICKS SCHEDULE; HE WAS BORN DURING A HOMESTAND, AND HIS FATHER RETURNED FROM A ROAD TRIP JUST IN TIME FOR HIS BRIS.

Dan Grunfeld’s birth was planned around the Knicks schedule; he was born during a homestand, and his father returned from a road trip just in time for his bris. Yet, little did I know of his father Ernie’s back story. The son of Holocaust survivors, who had endured both Nazism and Communism, his parents were Hungarian immigrants who came to the United States to enjoy freedom and opportunity, living modestly, working intensely trying to make a better life for themselves and, much more importantly, for their children. They worked with even greater intensity after their older son Leslie died of leukemia and all that they had was their son Ernie. Little did I also know that Ernie grew up in the neighborhood adjacent to my New York City home playing in the very same school yards where I played, attending Forest Hills High School as did my sister.

I grew up with these immigrant parents and heard their Hungarian, German, Dutch, Russian, Yiddish and Polish accents in English and how they spoke to their spouses in their native languages. I went to school with their children from whom so much was expected. They had to justify their parents’ sacrifice and to make good on the bet they made in coming to America. Remember how Alexander Vindman thanked his parents at the Trump impeachment testimony? Children of immigrants often negotiated the world of America for their foreign-born parents.

Ernie Grunfeld made good in the urban sport of basketball. A star with his body and an NBA lifer because of his mind and his work ethic, he was admired for his fair play. He did so as an identified proud Jew, exalting in his heritage, which he received from his parents’ pain and transmitted to his son with privilege.

The author tells the story of three generations of his family, his grandparents, and most especially his grandmother whom he unabashedly adores and with whom he spent enormous quantity and quality of time as she lived near his campus at Stanford, and he lived with her as he recuperated from a shattered knee that had to be rebuilt if he was to resume his basketball career.

The younger Grunfeld grew up with basketball. He shot hoops at Madison Square Garden as a kid and he dared as the son of a champion athlete to follow in his father’s footsteps as a competitive athlete. One can read this book as an ordinary sports biography and be much impressed by how competitive Grunfeld was with himself and his opponents, but not his father. One comes to understand how hard he trained, how much he worked and how deeply he loved basketball. One cannot fail to feel his heartbreak when at the peak of his career he was injured and then doubled down on his career, working unceasingly to come back, knowing on some level that he could never come back all the way. He played professionally in Germany, Spain and Israel and briefly in the NBA for the Knicks, the team he loved as a boy, the very team where his father was a player, broadcaster and general manager before being fired unceremoniously at the end of a long leisurely dinner at an Italian restaurant.

One can read this book as a Jew and again be impressed by the quality of his Jewish identity. That is who he is. Not particularly religious, he is nevertheless in synagogue for the High Holidays, and his wife is Jewish. When invited to play for Germany, he put the offer on hold until he spoke with his grandmother. Neither he nor she were willing to forget — but she will not hold the sons responsible for the sins of their fathers and certainly not for their grandfathers. The Maccabiah games are his Olympics. When he plays for Israel, he is at home. He has no need to explain why he is not playing on Yom Kippur. Shabbat dinners are as natural a part of his life as the streets of Jerusalem or the beaches of Tel Aviv. He has Israeli relatives, Israeli friends. Israel is the Jewish homeland, his homeland, which enabled his grandparents and father to leave Romania.

ONE CAN ALSO READ THIS BOOK AS THE HOLOCAUST MEMOIR HIS GRANDMOTHER, WHOM HE SO LOVINGLY CALLED ANYU, AND GRANDFATHER ANU DID NOT WRITE, BUT HE FELT DUTY BOUND TO TELL.

One can also read this book as the Holocaust memoir his grandmother, whom he so lovingly called Anyu, and grandfather Anu did not write, but he felt duty bound to tell. Notice the subtitle, “The Holocaust, A Basketball Legacy and an Unprecedented American Dream.” The Holocaust comes first in the title, and it looms ever so large throughout the book.

Grunfeld’s book is the story of Hungarian Jews living basically untouched while the Hungarian government was allied with Nazi Germany and then following the German invasion of March 1944, ghettoization in April, and deportation to Auschwitz beginning May 15, 1944. His grandmother survived in Budapest at a critical moment due to the good graces of Raoul Wallenberg. She was the recipient of the Schutz Pass, which seemingly gave her Swedish affiliation protection, while his grandfather was “fortunate” in quite another way.

Before the Germans invaded Hungary — this is a history the government of Hungary is seeking to repress — the Hungarians sent many Hungarian Jews to slave labor camps. Though they suffered under harsh and difficult conditions and many died, these men avoided the fate of Hungarian Jews after the German invasion — deportation to Auschwitz, the fate that awaited most of Apu’s and Anyu’s family.

He experiences his grandparents in a way that his father could not. His father dealt with their vulnerabilities, their pain, their weakness, and perhaps even, though he would never express it, their inadequacies. Grunfeld experienced their strength, their tenacity, and their wisdom. That may be the greatest distinction between the 2Gs, children of survivors, and the 3Gs, the grandchildren.

Grunfeld’s grandmother makes traditional Hungarian dishes and Grunfeld consumes them even beyond his enormous capacity as a growing athlete. One of the endearing qualities of this book is the unquestioned love that grandmother and grandson have for one another and the very Jewish feeling that love is expressed in food. Though I do not know the dishes, Grunfeld writes so compellingly that you can almost smell them. He should have included the recipes. Jewish immigrant homes like Italian and Greek ones, center around the table, life revolves around the meal. The kitchen is the family’s anchor.

So I read this book as a kid from Queens who walked the streets that Ernie Grunfeld walked and played in its schoolyards. I read it with admiration for the tenacity, toughness, discipline, and gifts that took one from those schoolyards to the NBA. I read it with an appreciation for a son who can follow in his father’s footsteps and yet chart his own course, who understands the privilege of being his father’s son and is not intimidated by his father’s giant shadow. I read it as a Jew enjoying the naturalness and the ease of full acceptance of one’s Jewish identity with pride and gratitude, and I read it as a Holocaust scholar who appreciates how different the third generation is from the second and how deeply they can embrace the survivors, understanding full well how their grandparents can view them as their triumph over Hitler, which they so very much are. ■

Michael Berenbaum is director of the Sigi Ziering Institute and a professor of Jewish Studies at American Jewish University.