Homelessness in 2020: An Overview and a Jewish Lens 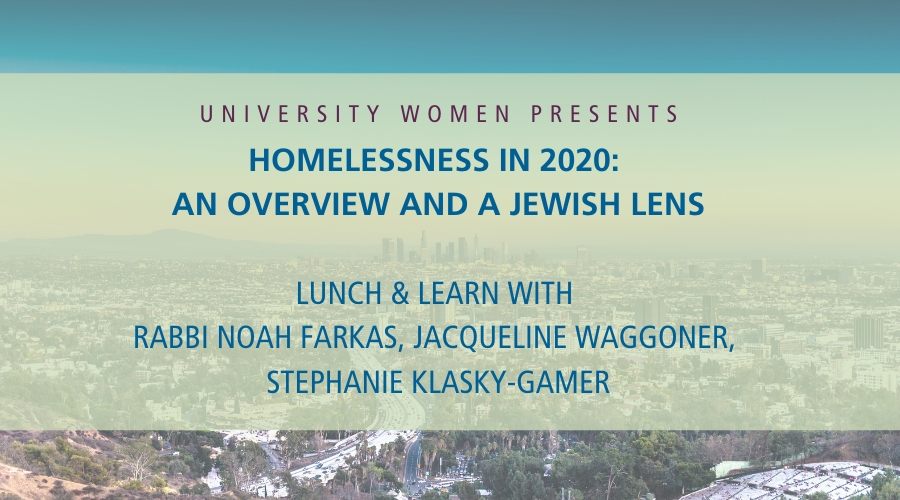 Homelessness in 2020: An Overview and a Jewish Lens
Featuring a Panel Discussion with:

Rabbi Noah Zvi Farkas is a clergy member at Valley Beth Shalom, the largest Jewish congregation in the San Fernando Valley. He was ordained at the Jewish Theological Seminary of America in 2008, where he won numerous academic prizes in the areas of Jewish Philosophy and Talmud. He is also a Guest Lecturer at the American Jewish University.

Rabbi Farkas is an appointed commissioner and chairperson of the the Los Angeles Homelessness Services Authority which oversees the regional strategy between public and private partnerships to end homelessness. He has been featured on NPR as a changemaker and is a rising voice of faith leadership in Los Angeles.

Before coming to VBS, Rabbi Farkas served as the Rabbi at Congregation Beth Israel in Biloxi, Mississippi where he helped rebuild the Gulf Coast Jewish community after Hurricane Katrina. Under his leadership the congregation reformed its board structure, built a new building, and worked with civic officials to ensure the Jewish community’s future in Southern Mississippi.

While in Rabbinical School, Rabbi Farkas served as a Chaplain for the United States Navy Reserve during Operation Iraqi Freedom. Rabbi Farkas worked with military families of all faiths to prep them for deployment and to help them spiritually and emotionally when they returned home.

Rabbi Farkas is a social entrepreneur, launching Seminary Leadership Project which has trained hundreds of Jewish clergy nationwide to create social change through JOIN for Justice where he also serves as a board member. Rabbi Farkas is also the founder of Netiya.org, an interfaith organization that works on food issues in Los Angeles, and boasts a membership of over forty congregations.  He is also the founder of VBSNextGen, which creates a home Jews in their 20s and 30s at Valley Beth Shalom through innovative learning and social programs.

Rabbi Farkas publishes widely on topics of spirituality, social justice, millennial engagement. He is a regular contributor to the Jewish Journal and speaks nationally at conferences.

Most Recently, Rabbi Farkas lead a two-year campaign to address homelessness in Los Angeles county. He galvanized a coalition of churches and synagogues along with many other organizations to pass historic legislation that will has moved over five billion dollars to build housing and services for the homeless and the near-homeless.  In 2016, Rabbi Farkas was recognized as one of America’s most inspiring rabbis by the Forward Newspaper.

Stephanie Klasky-Gamer leads LA Family Housing with nearly 25 years of experience in social and economic justice work and an in-depth understanding of housing policy and development. As President and CEO, she drives the organization to fulfill its mission, overseeing all aspects of operations including development, finance, real estate, and program design and management. She served on the Mayor’s Affordable Housing Commission; is a guest lecturer at University of California at Los Angeles (UCLA), University of Southern California (USC) and California State University, Northridge (CSUN), speaking on topics of housing and homelessness in Los Angeles.

Stephanie is active with the Women’s Presidents Organization (WPO) Los Angeles Chapter and is engaged with numerous community organizations including the Southern California Association of Non-Profit Housing (SCANPH), the Community Advisory Board of JPMorgan Chase, and national foundation Bend the Arc. She holds a BA from the University of Michigan and a Masters in Urban Planning from UCLA.

Jacqueline Waggoner is Vice President and Southern California market leader for Enterprise Community Partners, Inc. She oversees Enterprise’s affordable housing, community development, investment and strategic programs from the state’s Central Coast to San Diego. Jacqueline started with Enterprise in 2005. During her tenure, she has advanced capital solutions, intellectual resources and capacity building tools to achieve Enterprise’s strategic and production goals, leading to more than $300 million in Enterprise investments locally. She has worked with the city of Los Angeles, banks and nonprofit developer partners to create local funds for affordable housing, advocate for low-income families and support Enterprise’s vision of providing communities of opportunity.

Jacqueline serves on the 10-member Los Angeles Homeless Services Authority (LAHSA) Commission, the agency’s governing board, appointed by Supervisor Mark Ridley-Thomas in February 2017, and chairs LAHSA's Ad Hoc Committee on Black People Experiencing Homelessness. She is also a member of the County of Los Angeles Tenant Protections Working Group. Jacqueline serves on the board of directors of the Southern California Association of Nonprofit Housing (SCANPH), a membership organization that supports the production, preservation and management of affordable homes. She is the chair of the Restore Neighborhoods LA, Inc. (RNLA) board, serves on the board of governors of the California Housing Consortium and is a board member for the Los Angeles Business Council. Jacqueline serves on the steering committees for LA Thrives, a collaborative advancing equitable transit-oriented development, and LA Funders' Collaborative, a network promoting healthy, equitable and sustainable communities.

A Los Angeles native, Jacqueline has a bachelor’s degree in sociology and a master’s degree in urban planning from UCLA. Her experience in commercial real estate lending spans more than 20 years. Before joining Enterprise, she was vice president for community lending with Wells Fargo Bank in Los Angeles.