Choosing To Be Chosen 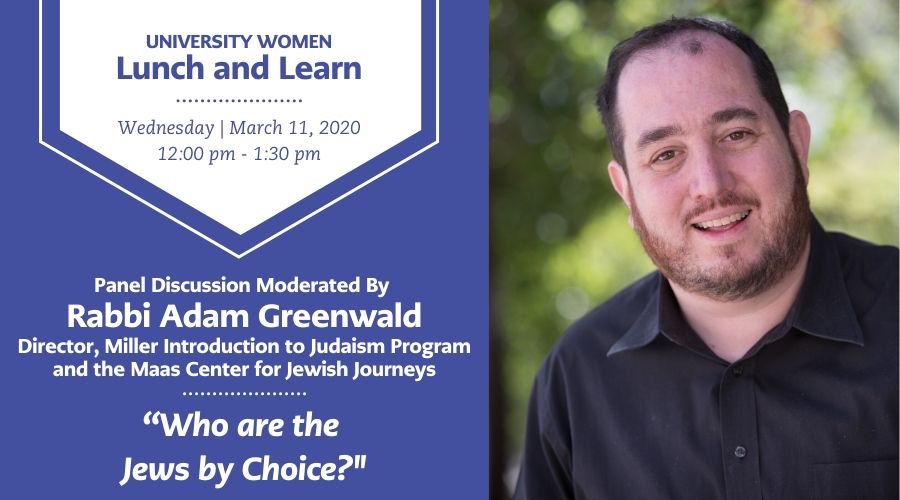 Rabbi Adam Greenwald will lead a panel and discussion on "Who are the Jews by Choice?"

We will listen to the sometimes heart-wrenching, sometimes hilarious, and always deeply honest stories about these individuals’ paths to becoming Jewish. Experience new meaning in your Jewish life through the eyes of passionate newcomers!

Rabbi Adam Greenwald is the Vice President of Jewish Engagement, the Director of The Maas Center for Jewish Journeys at American Jewish University and the Director of the Miller Introduction to Judaism Program, the largest learning program for those exploring conversion to Judaism in North America. Rabbi Greenwald also serves as Lecturer in Rabbinics at the Ziegler School of Rabbinic Studies. In 2016, Rabbi Greenwald received the Covenant Foundation's Pomegranate Prize in Jewish Education.

Rabbi Greenwald is the editor of On One Foot, an introduction to Judaism textbook and curriculum, in wide use across the US and Canada. He is a Fellow with the National Center for Learning and Leadership (CLAL)'s "Rabbis Without Borders" initiative and speaks and teaches nationwide on issues of conversion, inclusion, and engagement of Jewish millennials.

Prior to coming to the Intro Program, he served as Revson Rabbinic Fellow at IKAR, one of America's most innovative spiritual communities. He received his BA in History from UCLA and his MA and ordination from the Ziegler School of Rabbinic Studies in 2011.